“In the depths of New York City, on top of the Empire State Building, a creature rested.” This is the first line of @ manyvoices, a Twitter story written collaboratively by 140 elementary and middle school students across 6 countries. The story began with Mr. George Mayo, a teacher in Washington D.C., and was eventually edited and published. You can find a free pdf here.

We are using a similar model in our 8th grade language arts class to begin our unit on creative writing. the major difference between @manyvoices and our assignment is that Mayo created one twitter account for all contributors to share while we are using hashtags to collect and present the story using Storify. The hashtag and Storify make it easy to publish the finished stories, but we lose 11-12 characters.

Here are the instructions we gave to students:

Once all of the students tweet, it’s easy to search for, and individually drag them into the story.

The above screenshot shows Storify’s main editing page. The menu on the right-hand side allows you to search for many different types of content. For our story, I clicked on the twitter icon, then typed in the the hashtag for the class I was working on.

Here you can see that my search grabbed all tweets containing the hashtag I had specified. Since the hashtags for each class are unique, the search doesn’t grab anything unrelated. From here, you can drag the posts into the main story. I think it’s easier to drag them individually since they show up with the most recent first, which is actually the final tweet of the story.

The next step is publishing the story. After clicking the publish button at the top of the page, you can change the way the story is displayed.

Clicking the template button brings up this menu. Here you can choose the way your story will be displayed. We chose the slideshow because it worked best with the way we wanted to read the finished story in class.

Since most of the students hadn’t read their entire story, or the stories from other classes, reading them together was truly a fun experience, as you can see here: 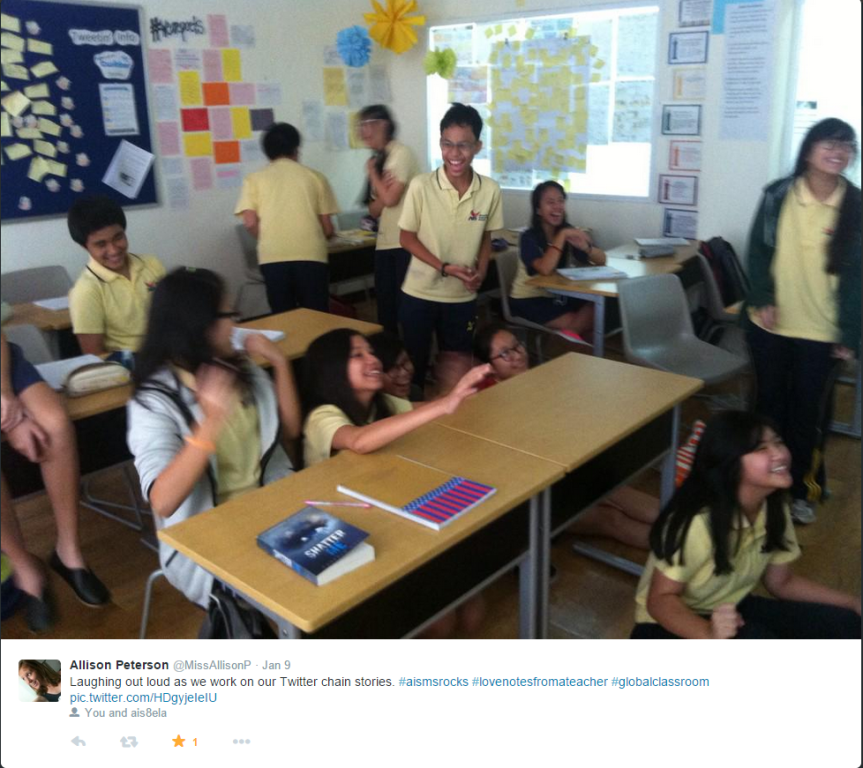 Our next step is to do another story with the entire 8th grade. From there, we may ask other classes to join, as Mr. Mayo did. Another thing I really like about this is that we can use the tweets to focus on language. Eventually, we’ll use them to create editing exercises that we can do as a whole class or in small groups.

Here is my first attempt using Piktochart to create infographics.

The English proficiency level of the students at my current school varies greatly. This presents a challenge when dealing with corrective feedback on writing assignments because we don’t know exactly what each of our students knows; we know what they were taught in 7th grade (I teach 8th grade), but with new students coming in all the time, it only helps so much. Corrective feedback on structural and/or grammatical topics the student has never learned gets them nothing except more confused, as it does with oral correction. We needed a way to help the student notice their errors, provide corrective feedback, and NOT overwhelm them with a page or red ink.

The answer to our question was first presented in 1978 by Levenston. I wasn’t around then, but it was a great year – Darkness on the Edge of Town and Van Halen were released, so ‘reformulation’ is in good company. Reformulation is when a native speaker rewrites a student’s piece of writing. The native speaker writes to make the piece sound more natural, making organizational and grammatical corrections while preserving the content of the original text. For more information on the history of reformulation and present status of reformulation research, read “Reformulation, Noticing, and the Development of L2 Academic Writing” by Jackie Dannatt.

We chose to use this technique with our struggling writers because it is naturally scaffolded and student-centered (Reid, 1994, Cited by Tardy, 2006). As you can see in the example below, we ask the student to do several things. First, they have to identify the change and write the original text and reformulated text in the table. Next, they have to describe the change. What I like about this is that it allows all students to comment on the change. The student could say something like ‘moved words’ or ‘fixed fragment’, depending on how much they understand. Finally, they have to check yes or no to let us know if they understand the change. This will help us plan follow-up support for the student, in groups or individually.

After getting the completed tables back from students and doing this on future writing assignments, we’ll be able to plan more appropriate practice as students pre-write and draft.

I’ll be updating this post in the next few weeks with some samples of the completed tables so please check back.

In this post, I will describe how we are beginning to integrate Twitter into our 8th grade English Language Arts classroom. We introduced Twitter just last week, and it is the first time to do so for both myself and my co-teacher. Fortunately, we have tech specialist TechGirlAsia (@jena_simon) to share her expert knowledge and guide us. Thanks, Jen!!

The first thing we did was create a class account. I created a Gmail account for the class that both teachers share. I didn’t want our email accounts to blow up with Twitter interactions, and since Gmail allows us to collect mail from separate accounts, it seemed like a good idea – so far, so good. Second, we created the class twitter account and set up the twitter profile. We used fotor.com to create our header photo. I take lots of pictures during class and threw a few together on fotor and fit them into the 1500 x 500 header.

The next step was a bit more challenging to figure out. We needed a way to constantly monitor what goes up on our feed. At first, I thought it would be great to follow all of the students, but this would result in a feed full of K-pop and ‘fandom’ posts (what is fandom?) since many students are already Twitter users.

“A kingdom of fans, Mr. Bill!!!” shouts a student who has 3300 Twitter followers. It’s true. Anyway, to easily manage what shows up in our feed, we followed Techgirl’s advice and didn’t follow any of our students. Instead, we use hashtags to get student tweets on our feed. To do this, we had to use another program – Tweetdeck in Chrome and Tweetcaster for Android. What these programs allow us to do is follow a hashtag. This can’t be done in Twitter alone, which is unfortunate because I am now getting notifications from two apps. They work by saving a hashtag search in some form of a column. For example, our first Twitter assignment is shown below.

In this assignment, we ask students to tweet a picture of something from their lives that connects to Lois Lowry’s The Giver. All students tweet using the hashtag #ais8giver. This is a unique hashtag that we created specifically for this unit. Now, when students tweet their picture, it shows up in Tweetdeck or Tweetcaster in the saved search column. From here, all I have to do is retweet so it will show up on my feed.

Here, you can see that these were retweeted by @ais8ela. This gives us complete control over what goes on and stays on the wall. Of course, a student could still post to our feed by adding @ais8ela to their post. In that case, we have to edit, retweet, then delete.

This is where we are right now. Our first assignment is due on Monday and Tuesday. It’s working pretty well so far, and I will keep updating this post as we attempt to do more cool stuff with Twitter in the classroom. Thanks for reading!

Students were pleasantly surprised when I shared a digital magazine I had created with Flipboard consisting of their tweets. They thought that the assignment had ended the moment they tweeted their picture. Creating the Flipboard magazine wasn’t too hard, but there were a few things I learned along the way about digital citizenship and internet safety that need to be mentioned.

As soon as TechGirlAsia opened my eyes to the possibilities of Twitter in the classroom, I was off to the races. In less than a day, I had all of my students signed up to twitter and an assignment ready to introduce. I overlooked a few things that caused some extra work later on in the process.

After creating the first magazine, I realized that each post included their full names (a no-no) and that the posts contained too many language errors. To keep the students’ identities anonymous, I had to retweet once again and delete the @student name. This puts the tweet in the class feed anonymously, as shown here:

Second, to deal with language errors in the post, we did two things. First, we practiced writing tweets by hand in class and had students edit each other’s tweets. Second, We analyzed and edited a few tweets as an entire class.

In addition, during the process of retweeting, I edited the tweets myself. To follow up on this, I asked students to find my edited tweet and compare it to their original tweet. Next week, they’ll bring in a short paragraph explaining the changes I made.

Creating the magazine in Flipboard is very simple for a few reasons. First, Flipboard allows the user to search for hashtags. After logging in, click on the search icon (magnifying glass) and insert the hashtag you’ve created for your assignment. 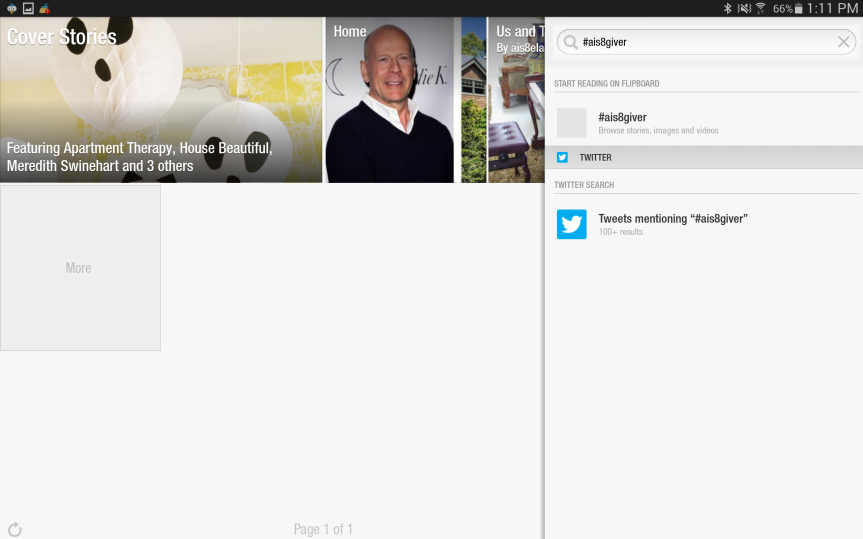 Click on ‘Tweet mentioning #______’. Flipboard will give you all of the tweets that have that hashtag. Next, look for the small + icon in the corner of one of the tweets, or long-press the tweet and click ‘flip into this…’ 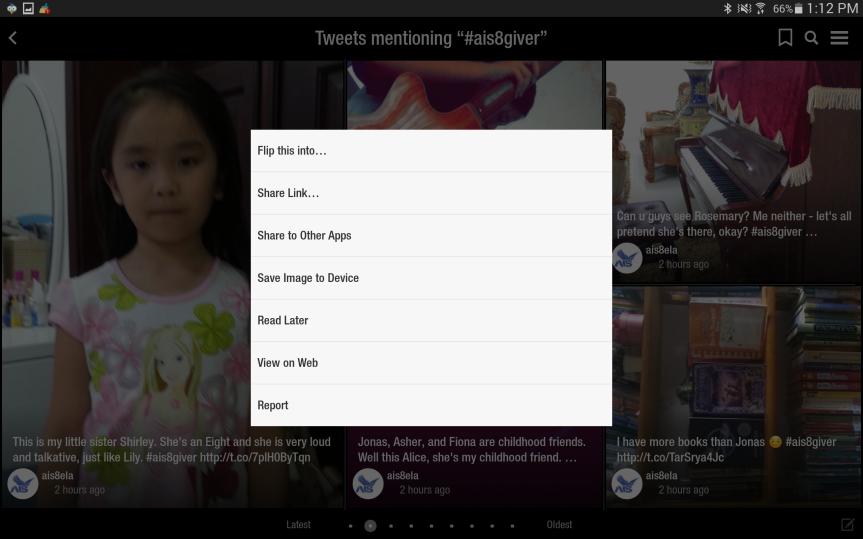 You will be prompted to add the post to an existing magazine, or create a new one. Keep in mind, if you have a few magazines there will be pages here, and the ‘new magazine’ option is not on the first page. 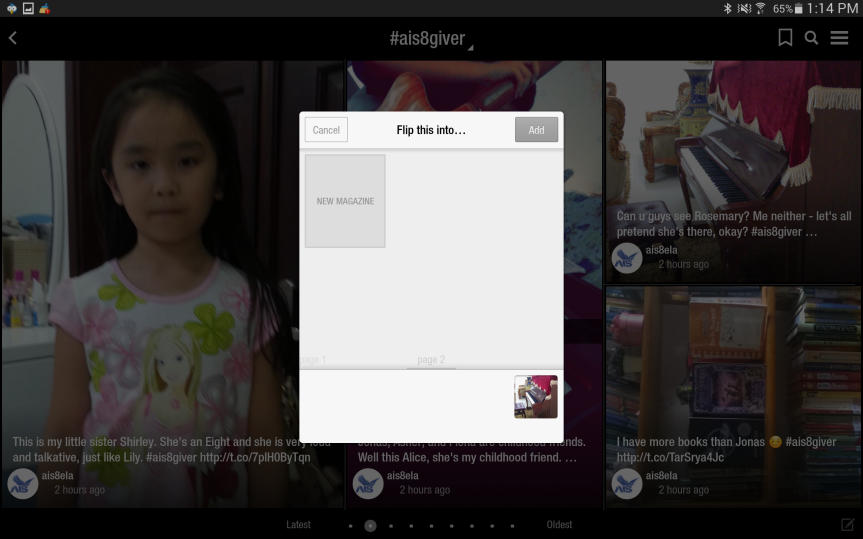 Once you click ‘new magazine’, you can add the title and subtitle for the magazine, and set the category and sharing options. Now you’re digital magazine is ready to be shared. A cool thing I figured out accidentally is that adding @Flipboard to your tweet when you share the magazine creates a link directly to Flipboard from the tweet. Awesome!

Here is our final product: 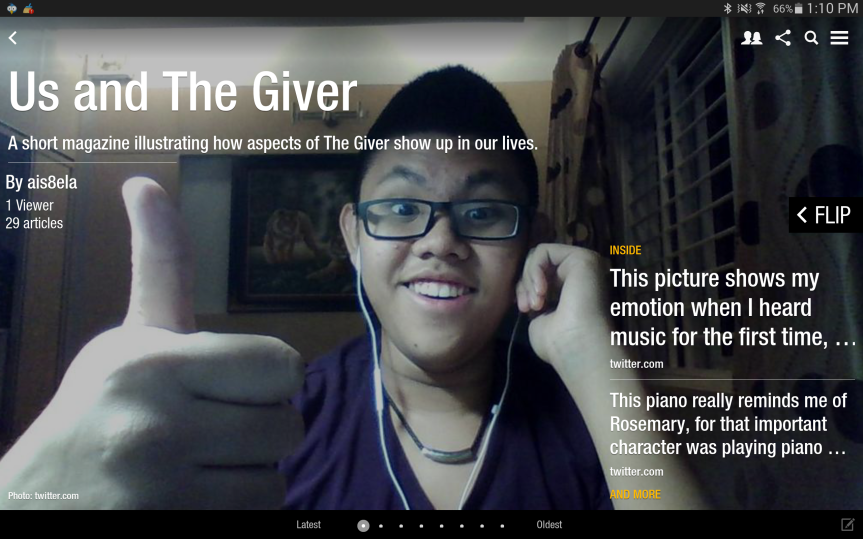 Also, long-pressing one of the articles within the magazine will bring up the options that allow you to promote one article to the cover. Our main man Jazz deserves the cover for his great tweet.

My career changed direction a bit in the last year. I went from training post-grad English teachers in Korea to teaching middle school in Vietnam. Having little experience in the middle school classroom, I worried that the methodology I had spent eight years with would leave me useless in a class full of 12 and 13 year-olds.

Fortunately, I found that the methodology, which formed the foundation of my development as a teacher and the program I spent eight years in, required little modification to be effective in the middle school setting.

Here is a clip of me introducing a literature circle assignment to an 8th grade class. I’ve annotated the clip to show the thought processes related to classroom interaction that go on while I’m teaching. I welcome all feedback, both positive and negative.